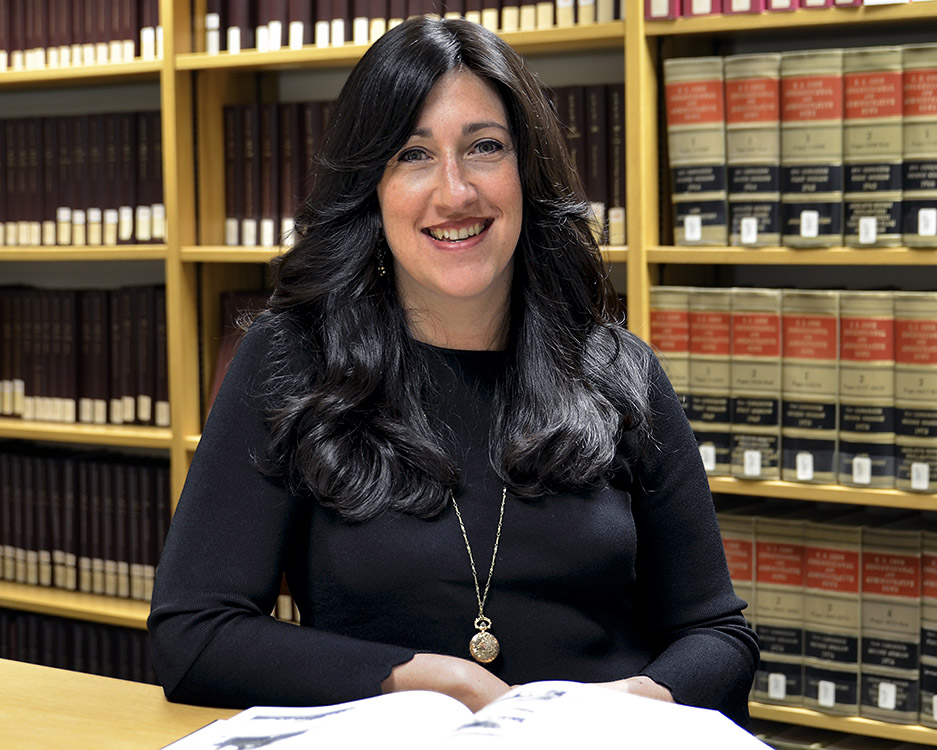 Dr. Miriam Marwick of the System Evaluation Division is the winner of the 2018 Andrew J. Goodpaster Award for Excellence in Research.

The award reflects Dr. Marwick’s development of important new research areas, the impact of her analyses, and the leadership she has demonstrated on a variety of IDA tasks. To cite a recent example: Dr. Marwick exhibited extraordinary analytical, management, leadership, and interpersonal skills in conducting one of our more complex, sensitive, and ultimately highly influential studies, A Comprehensive Assessment of the Army’s Air-Land Mobile Tactical Communications Network.

Dr. Marwick received her Ph.D. degree in Electrical and Computer Engineering in 2008 and completed a postdoctoral assignment in 2009, both at Johns Hopkins University. Her academic research in electronic device and circuit development involved the fields of electrical engineering, materials science, and solid state physics.

Early in her career at IDA, Dr. Marwick examined the feasibility of expanding IDA’s in-house modeling and simulation (M&S) capabilities for tactical networks. At her recommendation, IDA purchased the OPNET Modeler software package needed to employ DISA’s Joint Communication Simulation System. Dr. Marwick quickly applied this new capability to research projects, especially those involving test and evaluation (T&E) of software-defined radio and tactical communications systems. She made a concerted effort to identify how specific T&E oversight programs would benefit from incorporating M&S in their test plans and evaluation methods. Her work in this area was widely recognized for its excellence by sponsors, and within the Army stakeholder community.

Based on her test and evaluation research and recognized technical expertise, Dr. Marwick was a natural choice to lead the 2016 congressionally-mandated assessment of the Army’s air/land tactical network. During this study, she reached out to the broader DoD and industry stakeholder community, consistent with her conviction that we should secure a variety of perspectives on the problem. Her team identified key deficiencies in survivability, operational effectiveness, and suitability with both current and planned networks. Dr. Marwick also executed a “Phase II” effort that aimed to define solutions – that is, a way ahead for the Army. This was a pivotal decision that greatly increased the value of the assessment.

The excellent final report was widely distributed within DoD, Congress, and industry, representing IDA at its best. Senior leaders within the Army, including General Milley, Chief of Staff of the Army (CSA), embraced the report’s challenging recommendations. Indeed, General Milley sought Dr. Marwick’s direct assistance with the implementation of new approaches to network modernization practices.

For that follow-on effort, co-sponsored by the Army and the DoD CIO, Dr. Marwick formed a strong cross-divisional team, and quickly established the team as a critical source for objective, thoughtful, and credible technical research, as well as for analysis and advice. The team organized and led roundtable workshops to bring leaders, including CEOs of key commercial firms, to IDA. These leaders learned of the findings, conclusions, and recommendations of the IDA report and heard directly from the CSA or VCSA on the Army’s pressing network modernization needs. As the project moved forward, Dr. Marwick’s team analyzed the Army’s networks, mission command systems, and command post experiments. Carefully documenting its findings and pertinent lessons and recommendations in memos that were widely distributed within the Army, Dr. Marwick’s group was also asked to provide “Red-Team” assessments that have greatly informed and influenced Army decisions.

The well-earned trust that the Army places in Dr. Marwick and her team is evident in numerous ways, including the Army leadership’s insistence that she participate in meetings and decision briefs, with the expectation that she will challenge the Army’s thinking on network modernization.