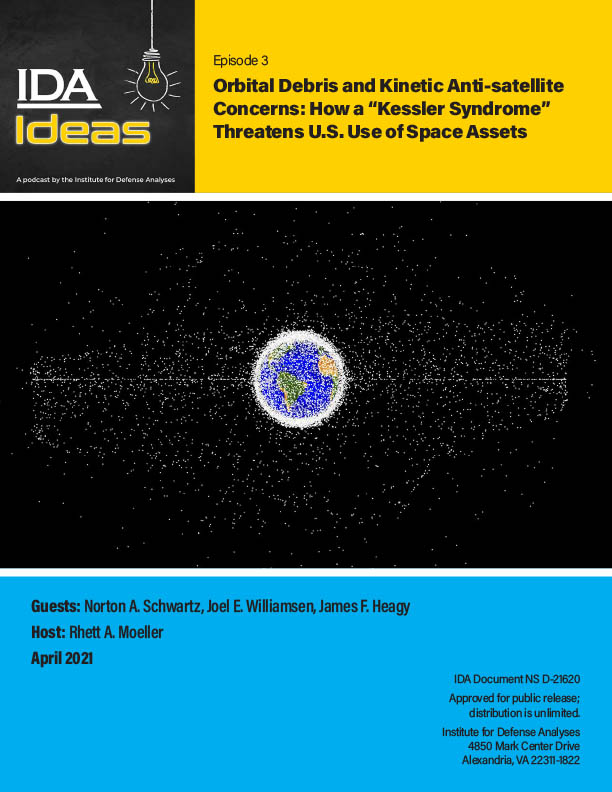 IDA Ideas host Rhett Moeller spoke to IDA President Norton Schwartz, Joel Williamsen of the IDA Systems and Analyses Center’s Operational Evaluation Division, and James Heagy of the IDA Systems and Analyses Center’s Science and Technology Division about the threat of orbital debris and kinetic anti-satellite (ASAT) weapons to the economic and military value of satellites in low Earth orbit (LEO), especially satellite constellations. Many of the comments in this podcast arose during the IDA Forum on Orbital Debris Risks and Challenges, held on October 8–9, 2020, and attended by IDA researchers and decision makers from the Department of Defense (DoD), U.S. Air Force, Department of Commerce, NASA, Federal Aviation Administration, and Federal Communications Commission.

IDA has supported nearly 20 years of sponsored and independent research into the effects of orbital debris and ASAT weapons on satellite systems. This research has intensified in recent years due to the phenomenal growth in satellite constellations in LEO, and the DoD’s expected use of such constellations for national defense. Much of IDA’s work has centered on predicting the effect of orbital debris on spacecraft mission loss, both in the short term from collateral damage due to satellite collisions or ASAT tests and in the long term as the background orbital debris population continues to grow. This growth has led to what many researchers believe to be the beginning stages of a Kessler Syndrome, named after the original NASA researcher who predicted the onset of a self-sustaining debris growth environment as existing debris hits operating and nonoperating satellites, creating more debris. Such a debris environment increases the risk of losing reliable and safe access to affected regions of space.

Listen to the podcast