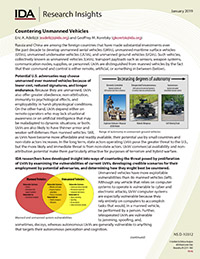 Russia and China are among the foreign countries that have made substantial investments over the past decade to develop unmanned aerial vehicles (UAVs), unmanned maritime surface vehicles (USVs), unmanned underwater vehicles (UUVs), and unmanned ground vehicles (UGVs). Such vehicles, collectively known as unmanned vehicles (UxVs), transport payloads such as sensors, weapon systems, communication nodes, supplies, or personnel. UxVs are distinguished from manned vehicles by the fact that their command and control is either remote, artificial, or something in between (below).