Analyses of Military Healthcare Benefit Design and Delivery: Study in Support of the Military Compensation and Retirement Modernization Commission 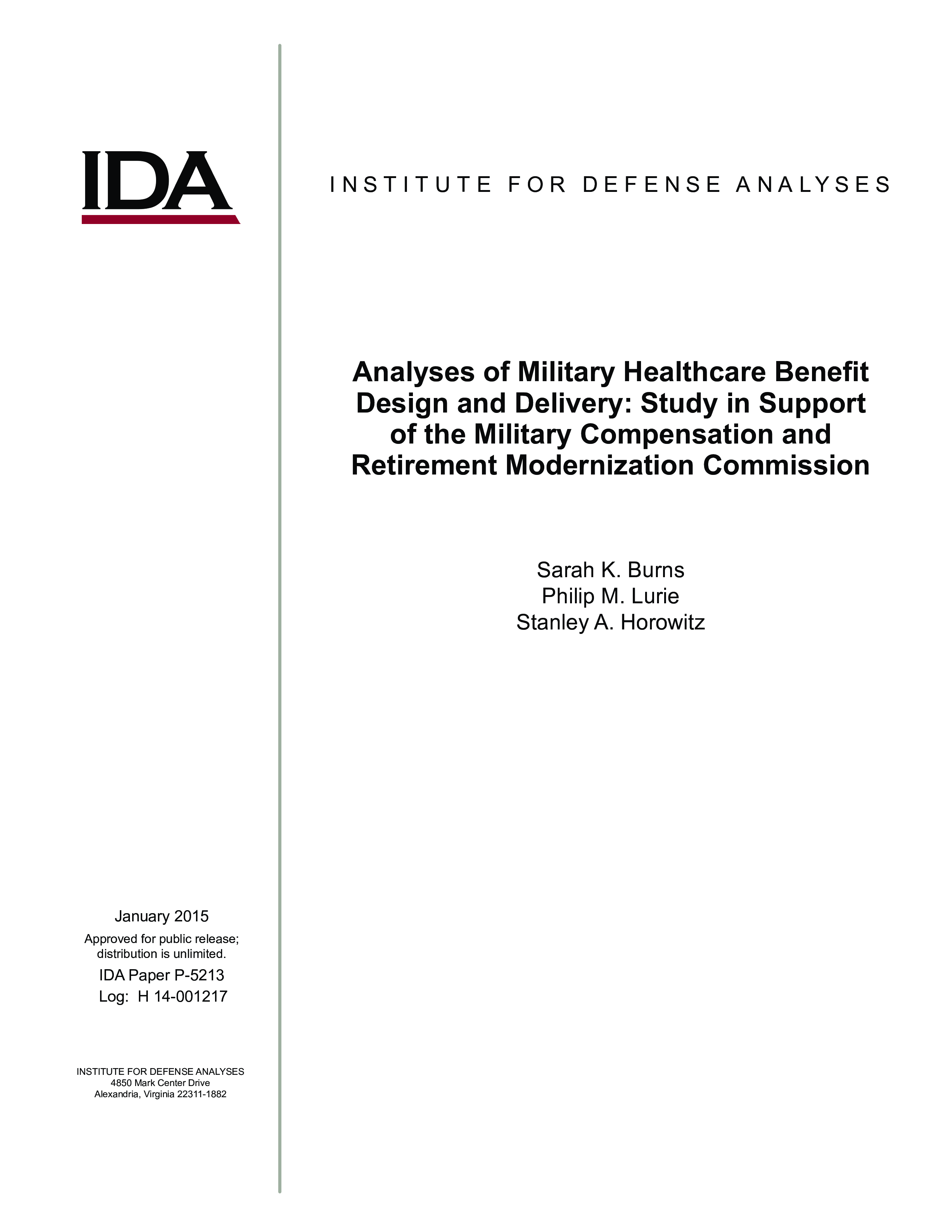 Over the last decade, personnel costs have been the fastest -rising component of the Department of Defense (DoD) budget, driven to a considerable degree by healthcare. Concerned about the impact of rising healthcare and other personnel costs on military readiness, the Congress established the Military Compensation and Retirement Modernization Commission (MCRMC), to perform a systematic review of the military compensation and retirement systems and to make recommendations for modernization.

The Institute for Defense Analyses (IDA) was asked to support the MCRMC by performing research to assist the Commission’s considerations of potential modifications to the provision of health- related services . The analyses in this report are designed to assist the Commissio n in formulating its recommendations by satisfying three primary objectives : (1) inform the public and the Congress about the costs of DoD healthcare; (2) provide key cost elements for the Commission staff to consider in developing savings estimates associated with potential changes to the provision of the peacetime healthcare benefit for eligible beneficiaries known as TRICARE ; and (3) provide the Commissioners with an independent, authoritative reference document to use when testifying on and defend ing the Commission report.

This paper begins with a summary discussion of the Military Health System (MHS) and a detailed presentation of current military healthcare costs. The MHS is responsible for both medical readiness of the force and TRICARE , which serves 9. 6 million beneficiaries worldwide through a system of military treatment facilities (“direct care”) and a supplemental network of civilian healthcare professionals, institutions, pharmacies, and suppliers (“purchased care”).

Following the presentation of mil itary healthcare costs under the current system, we present the estimated cost of providing care for a subset of beneficiaries under an alternative benefit design proposed by the Commission—a premium -based insurance model consistent with an employer -sponsored benefit program. The Federal Employees iii Health Benefit s (FEHB) program is used as a model for the proposed reform . Move ment towards a premium -based model would constitute a f undamental shift in DoD healthcare—a shift that would turn the focus away from reliance on price -controlled reimbursement rates.

Using the observed enrollment behavior of the FEHB civilian population in conjunction with demographic data on the DoD beneficiary population, we develop a simple cohort -based methodology to predict the plan enrollment behavior that would result if DoD were to purchase healthcare through an FEHB -like program. A series of analytically derived adjustments to FEHB plan premiums to reflect the health risk of the DoD p opulation is also developed. Plan choice and premiums are then used to construct the total cost of covering the relevant beneficiary population through this FEHB -like model. The final cost estimate suggests the popul ation could be covered for approximately $18 billion per year. This figure represents the estimated cost of delivering care in steady state equilibrium after allowing for a period of transition.

Following the presentation of the cost estimate for delivering care through the FEHB -like model, we d evelop the estimated cost of covering the same beneficiary population under the TRICARE model. To ensure a fair “apples to apples” comparison is made, we develop a cost concept called the “DoD premium equivalent cost .” This concept reflects all costs incur red while delivering care that would be covered by premium s under a private health insurance model. The DoD premium equivalent cost is estimated to be approximately $21.2 billion , suggesting budgetary cost savings in the range of $2 to $4 billion with a be st estimate of just over $3 billion.

While $3.2 billion represents our best estimate of the budgetary savings generated by the Commission ’s proposed reform, this amount does not reflect the full value of switching to a private health insurance model. This is because benefit quality would rise under the new FEHB -like benefit. To account for the increase in quality , a n analytical concept is developed to approximate the full potential savings that would result if benefit quality were held constant between the current TRICARE model and the proposed FEHB -like model. We call this concept the “full cost savings ” from switching to private health insurance and estimate it is equal to $7.5 billion . Of the $7.5 billion full cost savings, $4.3 billion goes back into the benefit program , where it is used to increase the benefit quality by subsidizing enrollment in higher cost plans. The remaining $3 .2 billion becomes the budgetary savings