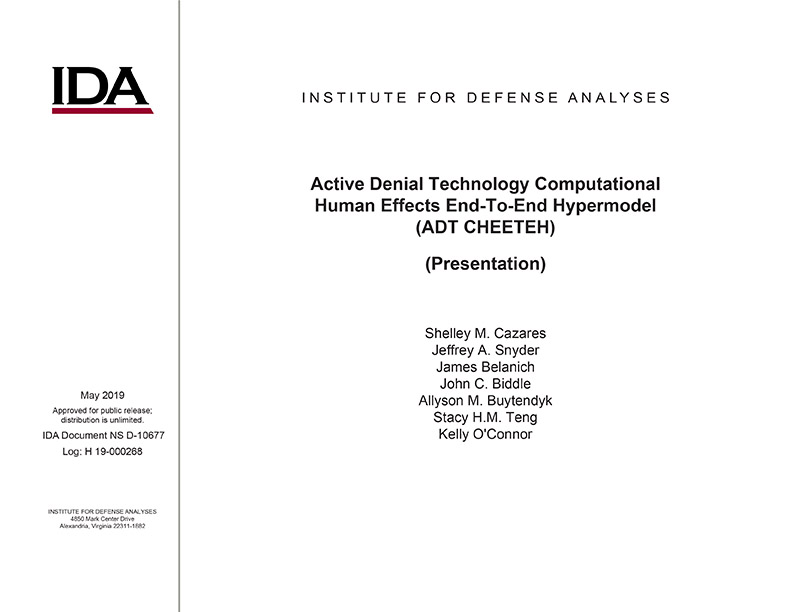 We developed the Active Denial Technology Computational Human Effects End-To-End Hypermodel (ADT CHEETEH), a computational model to simulate the response of a human target to Active Denial Technology (ADT), including estimates of ADT’s physical, physiological, cognitive, and behavioral effects. The ADT system is a counter-personnel non-lethal weapon for crowd control, convoy protection, and perimeter security. The target is subjected to pulses of focused 95 GHz electromagnetic energy. The energy diffuses approximately 400 microns into the target’s skin, producing no skin damage. However, the target may still perceive a burning sensation strong enough to repel (i.e., compel the target to immediately move away). We use one model component to estimate the physical output of the ADT system, coupled with three additional components to estimate the ADT’s effect on the target’s physiology, cognition, and behavior. All components passed verification tests. Validation data was available for only the physical component, which passed its validation test. Each run of ADT CHEETEH completes in only a few minutes on a standard laptop computer, beginning with a simulation of the ADT beam formation and concluding with the estimated time at which the target is repelled. This end-to-end approach quantifies the ADT system’s main measure of effectiveness (the probability of repel) as well as its intermediate measures of performance (dose on target, temperature and damage in skin, perceived pain level, etc.) Once fully validated, ADT CHEETEH’s comprehensive results may be able to feed into force-on-force simulations to provide educated estimates of ADT effectiveness in military scenarios.